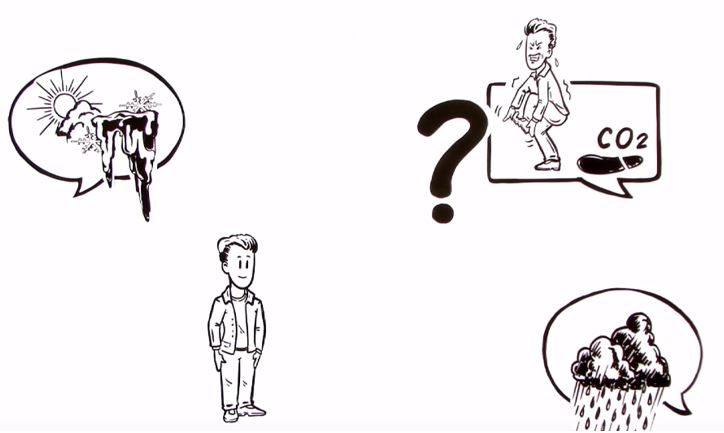 Carbon footprint is defined as the amount of emissions created by us, expressed as carbon dioxide equivalent. These emissions can be created in many sources including manufacturing, agriculture, electricity generation and the exhaust from vehicles.

Reducing carbon footprint is really important because too much emission of carbon dioxide or any other equivalent greenhouse gases will lead to greater increase in the temperature of the Earth (a phenomenon known as global warming).

Some Serious Talk About Global Warming

Put aside 3D printing for a moment and allow us to have some discussion on global warming.

People tend to not take global warming seriously because in the short term, there seems to be nothing severe. But in the long term, global warming can cause severe problems.

You may have heard of global warming causes the ice to melt and polar bears lose their habitat. But it only bothers the polar bear and not us, so most of us ignored it. This is not true as global warming will indeed create some issues for us.

These climate changes would cause lost crops, increased risk of wildfires, water shortages, damaged infrastructure and many more.

Another reason global warming should be taken seriously is this, it is irreversible. In other words, you cannot reverse the increase in temperature (you cannot reduce the temperature once it has increased).

If a problem has a solution that is able to reverse its impact, it means even if the problem has occurred, we can still fix it and things would go back to its original condition.

However, global warming is irreversible and once the temperature has increased, we can no longer lower it to its original temperature.

If you are thinking of some sort of cooling mechanism would help, like how your refrigerator and air-conditioner works, then sorry to tell you, it couldn’t help.

In other words, the refrigerator and air-conditioner did not make the Earth cooler, it makes Earth warmer.

Now, let us get back to 3D printing.

However, to make the explanation simpler, we will assume more energy consumption equates to higher carbon footprint.

We will focus on the carbon footprint of 3D printing in the three following aspects,

Every material carries a certain amount of embodied energy, energy used to extract the raw material, process the material and maybe even shape the material into desired geometry.

Carbon footprint from material can be reduced by reducing the amount of material use (that is why you were told to reduce, reuse and recycle).

Plastic can only be recycled several time before its mechanical properties deteriorates. Therefore, these 3D printer did not perform that well in terms of recyclability. There are also 3D printers which work using metal powder which can be recycled many times.

However, since the majority of the 3D printers uses plastic, 3D printing did not perform that well in terms of carbon footprint for recycling material.

In terms of reduce, 3D printers are able to produce parts of complex geometry, which indicates that it is capable of producing parts with efficient geometry.

This means 3D printed parts only use material as necessary. Therefore, the 3D printed part could use less amount of material to perform the same function as parts made by other methods such as injection molding.

Therefore, 3D printed parts carry less carbon footprint as compared to other manufacturing method in terms of reduction in material.

It may not be intuitive how 3D printing could help reuse materials. Imagine this for instance, most of the time when any appliances around us is spoiled, there is a big chance it is only a small part of that appliance is spoiled which makes the whole thing not working.

Sometimes, it may be a bit hard to find the spare part and we couldn’t think of any other ways to fix it, so we throw it away. 3D printing allows us to easily make the spoiled part and replace it, which will eventually make the appliance work again.

In other words, 3D printing makes fixing possible for anyone. This allows the same appliance (material) to be reused, which results in less throwing away, and eventually less material waste.

There are multiple contradicting research which shows different numbers for the energy used when manufacturing parts using 3D printing.

However, most research tend to compare 3D printing and injection molding based on energy consumption per unit mass of material.

This method is not that accurate since 3D printing tend to manufacturing parts of lower mass of material due to the use of infill and the ability to create parts of efficient geometry.

Although different from manufacturing, the parts manufactured using 3D printing allows the energy consumption during assembly to be reduced.

This is because the ability to create complex geometry using 3D printing allows multiple parts to be manufactured as one single part.

Instead of having many parts which needs to be fasten/bonded multiple times, 3D printing allows all those parts to be 3D printed as one piece and eliminate all the assembly process.

Therefore, reducing the need to perform assembly, and thus reduces the energy required for assembly.

Anything that needs to be transported from one place to another requires some form of fuel to create the energy needed to ship the parts.

3D printing is able to reduce carbon footprint the most in terms of transportation because 3D printing will greatly reduce the need of transporting parts from one place to another.

This is because whenever a part is needed, only the 3D drawing needs to be sent to that person where that individual could directly 3D print the part out from his own 3D printer.

However, this are assuming that every individual has a 3D printer at home which makes it possible to 3D print the parts at home. Although it has not yet happen, we believe it will happen in the future.

Even if the 3D printed parts were to be shipped, the parts are lighter than using other manufacturing method, which will result in using lesser fuel during transportation.

Speaking of reducing weight for transportation, there are already several companies which uses 3D printing to design a lighter and more fuel efficient cars and aeroplanes.

This greatly reduces the fuel required to ship the parts from one place to another. Therefore, reduces the carbon footprint.

3D printing itself leaves a smaller carbon footprint as compared to other traditional manufacturing method. However, whether or not 3D printing reduces the existing carbon footprint is a difficult question to answer because it depends on a lot of factors.

There is currently not enough research to point the exact direction on whether or not 3D printing reduces carbon footprint.

The US Department of Energy estimated that 3D printing could be worth US$5 billion by 2020 and also has the potential to reduce energy costs by 50% and cut material costs by 90%.

There are quite a number of claims which suggest 3D printing could indeed reduce carbon footprint. However, we currently could not find any concrete research on this topic to validate the answer.

Therefore, we will not provide any definitive answer until there is any research which clearly validates the answer.

But as 3D printing improves and used by more people, we believe that 3D printing will be able to reduce carbon footprint.

Did we miss out any other points on how 3D printing could reduce carbon footprint? Let us know in the comments below.